Keeping well in the city 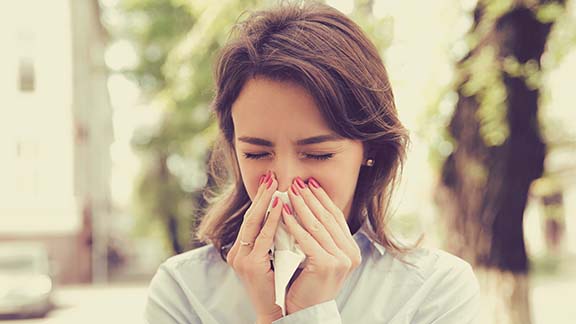 The growth of city living is increasing around the world: by 2030, 60% of people are predicted to live in urban areas, with one in every three living in a city with at least half a million inhabitants1. And it’s being near other city-dwellers that puts us at greater risk of catching colds, developing coughs or picking up viruses.

Fortunately, there are measures you can take to avoid getting ill. The following five tips will help you stave off sickness.

When it comes to catching a cold on the bus or train, it really is a numbers game. Many disease-causing bacteria can spread up to four metres and remain alive in the air for up to 45 minutes following coughs and sneezes2.

Short of living in a bubble, what can you do? Standing during your commute may be unpleasant, but if you must, then research3 shows there are far fewer germs on ceiling poles than on vertical poles on public transport. And once you’ve arrived at your destination, try not to touch your face if you’ve touched surfaces on the trains, buses or escalators, as this is the easiest way for viruses to spread.

2. When life gives you lemons, just say no

Whatever your chosen beverage – gin and tonic, iced tea or simply sparkling water – a slice of citrus is typically offered as standard. But beware: a fruit wedge in or on your glass could be a recipe for disaster. You don’t know the history of the lemon, lime or hands that have touched it.

Plus, research4 into the rate of bacterial transfer to lemons found that lemons contaminated with E. coli and left at room temperature for 24 hours had an increased bacterial population, so you may wish to pass on your citrus garnish unless you know where it came from.

3. Wash your hands for longer

Perhaps surprisingly, a June 2017 study5 of handwashing found cold water to be as effective as hot water for killing germs, although the researchers limited their study to E. coli bacteria. Also, double the time you take to wash your hands – 30 seconds rather than the usual 15 – as it’s far more effective for protecting yourself against infections like the flu.

Wherever you wash, remember that when you turned those taps on, your hands weren’t clean. To turn them off hygienically, grab a paper towel or tissue to prevent your hands touching the dirty taps again.

It’s a golden rule for all urbanites: stay hydrated in the hot summer months by making sure you always have a water bottle with you. But be wise about your chosen vessel. Opting for a reusable water bottle – even one specifically designed for everyday use – is arguably a one-way ticket to sickness. A team of testers6 swabbed bottles that had been repeatedly used by an athlete over the course of a week. They found that slide and squeeze-top bottles were crawling with the most bacteria, and even said that drinking from the latter was as unhygienic as eating a meal from your pet's food bowl.

In fact, 60% of the germs found on the bottles were associated with human illness. So if you drink straight out of the bottle and the thought of purchasing a new bottle every day seems too indulgent, choose the straw-top option, as these were found to carry the least harmful germs. Also, opt for smooth stainless steel over plastic, and wash the bottle thoroughly after every use.

5. Don’t sit near the photocopier

Struggling with asthma or breathing difficulties? Paying attention to where you sit in the office could help. Experts advise that photocopiers and laser printers create ozone gas as they work, which has been found to cause sore eyes, headaches and respiratory irritation – and the toner used in the machines isn’t great for you either7. So if you can smell a chemical-like odour from where you’re sitting, definitely think about relocating.

In short, there are actions you can take to avoid illness in crowded cities. Add to these an active office lifestyle, and you’ll be fighting fit regardless of the unique stresses of urban living.