Improving physical and mental wellbeing in the long term

It is vital now, more than ever before, to have a wellbeing strategy that helps keep us emotionally and physically fit for the future.

The wellbeing industry has been steadily gaining traction for the past decade and is now a $3.3bn global industry1. But since the pandemic, the focus seems to have shifted; people are really thinking about wellbeing in terms of long-term preventive health. According to Bupa Global’s 2021 Executive Wellbeing Index, promoting personal wellbeing is becoming more important than ever to executives around the world2.

For Grace Yeoh, a senior journalist in Singapore, the pandemic prompted her to increase her fitness. “I was much more active during the pandemic for one main reason initially - as a mental health coping mechanism,” she says. “Exercise became the one thing I could control when it seemed I didn’t have any control over anything else in the world, including any semblance of what my future would look like. But for however many hours I spent in the gym every time I was there, it became easier to keep track of life.”

Yeoh was one of many Singaporeans who reported increasing their fitness, according to Bupa Global data; more than half say the pandemic has elevated the importance they place on their personal wellbeing — the highest figure reported in any region.

While Singaporeans were leading the trend, the figures still showed that people around the world were paying more attention to diet and exercise, with 42% doing more exercise and 44% intending to be even more active in future.

Yeoh says that the pandemic actually changed her relationship with exercise. “I’ve always been active, but I used to approach exercise as a chore or an obligation. I began running again during the pandemic despite having hated it previously, because it meant too much time with my thoughts. But the pandemic forced me into a self-reflective space when everything slowed down and spun out of control. I became much more in tune with myself and my emotions and thoughts, and I found my runs were time well spent to embrace this side of myself.” 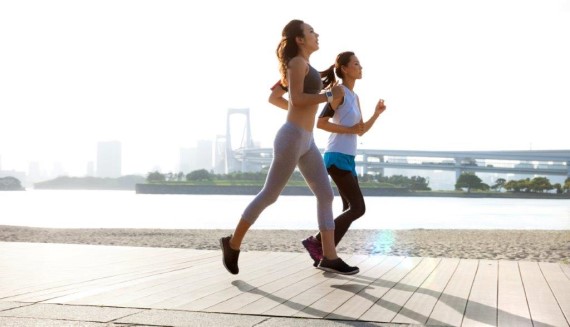 Rush back to life

Yeoh says she now enjoys exercise much more than before, and “am likely to continue it”. But others are finding that now that restrictions have eased, good habits can fall by the wayside. In addition, there is a temptation to rush back to “normal” and over commit socially and at work in a bid to make up for lost time. “It is naïve and wrong to think that any of us over a long period of time can sustain burning the candle at both ends,” Dr Pablo Vandenabeele, Clinical Director for Mental Health at Bupa warns.

It could add to the growing burden of mental health problems experienced by nearly 80% of executives around the world, with the highest levels in the Asia-Pacific region according to Bupa Global’s data. In Singapore, for example, almost half struggled with fatigue, 41% reported mood swings, 35% experienced a drastic change in appetite, 33% were troubled by low mood, sadness or anxiety, and 31% had found it harder to make decisions.

The danger, of course, is dipping into harmful coping strategies that some used during the stress of the pandemic, but which could harm our long-term health. 40% of executives around the world said they smoked either every day or four-six times a week. While almost half (49%) said they regularly had less than seven hours sleep, according to Bupa Global’s statistics.

An increase in drinking was also a problem experienced worldwide. According to a study of over 2,000 people by the University of Texas, there was an increase in binge drinking for each week in lockdown3. The report found that those who had previously suffered from depression were more likely to binge drink.

The key to avoiding undue stress is to find a balance – before burnout strikes. “It’s important for every human being to have limited periods of stress that are then balanced with rest and relaxation,” Dr Vandenabeele says. Where different people vary is that some can sustain feelings of stress for longer than others. When it’s too late it’s much harder to remedy burnout. It’s important for everybody in an organisation regardless of salary or title, to avoid burnout. Mental illness doesn’t discriminate and any of us are vulnerable to burnout; we all have to take steps to prevent that.”

Part of that can be looking at the work-life balance – something executives around the world, but particularly those from Singapore, are addressing. Globally, almost half of those surveyed in the 2021 Executive Wellbeing Index have decided to work fewer hours in order to recalibrate their work-life balance, with 57% of Singaporean high-net-worth individuals leading the way.

It is also important to introduce new wellness habits. Something that executives around the world are aware of, according to Bupa Global’s data. The most common goals globally are almost half wanting to improve their diet – rising to 68% of Chinese high net worth individuals (HNWIs) – and nearly 40% wanting to lose weight.

But equally important is addressing emotional health. Around the world 84% of global leaders have taken steps to support their mental wellbeing. Techniques vary from doing more exercise, to practicing mindfulness and meditation.

Nearly a quarter of those surveyed feel that spending time in nature is one of the most important factors for good personal wellbeing. Studies led by Japanese scientists and repeated all over the world have documented benefits to body and mind just from taking a walk in the woods, a practice known as shinrin yoku or forest bathing4. For Yeoh, exercise gives her the mental space she needs. “The pandemic forced me to develop healthier ways to deal with my emotions and problems,” she says.

It is important to experiment: “What works to decrease stress and improve one person’s mental wellbeing may not work for somebody else,” Dr Vandenabeele says.

But he warns that experimenting with new wellbeing techniques should be done “when you are in a good headspace. When people try meditation, mindfulness or yoga for the first time to alleviate stress when they’re feeling anxious, it’s unlikely to be beneficial as they won’t have the skills to make it effective for them. Finding ways to genuinely relax ourselves requires skills and experimentation.”

For some that might mean getting external support. “Everyone finds different things stressful and has different capacities to deal with stress; this is why everyone has a different way to alleviate stress,” Dr Vandenabeele adds.

The number of people who seek help varies drastically by country. In Singapore, for example, despite high numbers of those surveyed reporting signs of poor mental health, only 8% had spoken to a doctor or mental health professional, and just 10% have used virtual medical services — fewer than half the number globally (22% and 23% respectively). Instead, executives there wanted their workplaces to step in, with 40% saying they thought their organisations should put more focus on preventive health and measures to support healthy lifestyles.

In the UAE, however, respondents showed a preference for more formal support, with most (77%) seeking help from their insurance company, a similar number (74%) using virtual medical services and 68% speaking to a doctor or mental health professional. In the UK, respondents were among the most likely to say they ‘did nothing’ to help support their mental health, although 35% tried exercise and 32% tried meditation or mindfulness.

Bupa Global has resources for you and your family. If you’re a Bupa Global customer and have a health concern, the Global Virtual Care (GVC) service provides confidential access to a global network of doctors by telephone or video call, with virtual appointments available 24/7 in multiple languages – enabling you to speak to a doctor at a time that suits you.

Bupa Global customers also have access to our Healthline service, which gives access to general medical information (mental and physical) as well as providing advice from health professionals and referrals for a second medical opinion.

Alternatively, if you have access to Bupa Global through your employer – you will be able to access Bupa LifeWorks, our Employee Assistance Programme. This service entitles Bupa Global policyholders’ access to trained advisors 24 hours a day, 365 days a year, via phone or online to talk through any work, life or personal concerns.

Global Virtual Care is not regulated by the Financial Conduct Authority, the Prudential Regulation Authority nor the Central Bank of Ireland. This service is provided by a third party, Teladoc Health, directly to you. Bupa Global assumes no liability and accepts no responsibility for information provided by this third party; or the performance of the service. Support and information provided through this service does not confirm that any related treatment or additional support is covered under your health plan. This service is not intended to be used for emergency or urgent medical treatment.