Which child health checks should every parent know about? 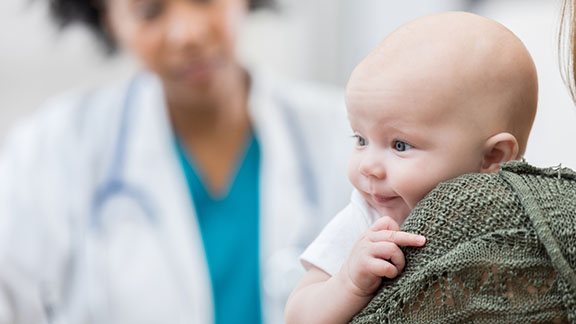 The first 18 months with your baby can be one of the biggest roller coasters of your life. Is she reaching out for that toy or just waving her hands in the air? Is he speaking clearly enough? Are those eyes focusing properly? Here, Bupa Medical Coordinator Dr Alexander Lastra explains what you can expect and what you should watch out for.

At birth, babies are usually given a whole range of different checks, which generally include heart rate, ears and hearing, breathing, eyes and hips. In the UK, babies are also given a test in which their heel is pricked to collect four drops of blood on a special card. This is to screen for conditions including sickle cell disease and cystic fibrosis1.

Many babies have a slight squint for the first couple of months, which is nothing to worry about. On the other hand, if you notice a white coating on the tongue that won’t come off, this may be oral thrush, which will be very painful if you’re breastfeeding and they pass it on to you – if this happens, your doctor can prescribe medication2.

And although babies should be checked at birth for tongue-tie, flag up any feeding problems, because they may be due to this condition, which is easy to fix3.

Around now, babies start being able to control their neck muscles and noticing what’s going on around them. Your baby’s eyes should be able to follow a shiny toy and they should start smiling back at you, so if they aren’t, keep a close eye and talk to the professionals if you’re worried.

A good time to bring this up and other concerns is at the check-up new mothers should get at around six weeks4. It involves a pretty thorough investigation of your baby’s physical development, and provides an opportunity to talk about vaccinations (in the UK, these start at around eight weeks).

It’s also worth remembering that babies do cry a lot at this stage. “It’s their only form of communication,” Dr Lastra says. “Many parents also find that over the next few weeks and months, they learn to tell the difference between different sorts of cry – tiredness, distress, hunger and even boredom.

“Remember too that it’s often more distressing for you than for them, as we think all cries are a sign of being upset. But if your child’s crying all the time without stopping, and especially if they seem to be in distress, do talk to the professionals.”

By this point, your baby’s development is well under way. They should be able to hold their head up for brief periods and make a pretty good grab for dangling toys5. And those cooing and gurgling noises are their way of mimicking the patterns of the words they’re hearing around them6.

If your baby seems unable to focus or is still squinting after three months or so, do talk to your doctor. For instance, at this age they should be reaching out for a black toy against a white background7. Also, seek medical advice if they’re not making any noise, and if they’re not smiling this could be a hearing or communication issue8.

Six months is a big landmark in all kinds of ways, not least because babies’ mouths and digestive systems are ready to move on to food9. They’re also well on the way to sitting independently, and some are starting to crawl. It’s also the point at which it’s very clear that they are starting to take in the world around them a lot more, and becoming much more interactive too, smiling and laughing at the people they see most10.

“Most babies sit up around this period,” Dr Lastra says. “Many need the help of a bit of propping up, so the only real cause for concern is if your baby seems permanently floppy and doesn’t seem to have acquired any muscle tone at all by this stage.”

If they’re not managing any head control by six months, or they’re having continual problems sucking and swallowing, talk to the professionals and, if necessary, ask for a referral11.

By this point your baby’s bodyweight has usually tripled and brain more than doubled since birth. Around now, they should be mobile, although some are still bum-shuffling and others are running around12. They now play with toys and follow simple baby books, and even if they’re not saying much, they should be understanding a lot of what you say13.

However, as Dr Lastra warns: “It’s important to note how your baby appears to be understanding and communicating overall. Do they seem to follow if you’re talking about ‘teddy’ or ‘bedtime’? Do they have their own ways of communicating with you, like waving bye-bye, pointing independently or clapping their hands?”

In the lead-up to the one-year mark, babies in the UK are usually offered another review of how they are progressing both physically and mentally14. It is very tempting to compare obsessively around now, because some babies are very ‘advanced’ while others are less so. It is sometimes hard to get a balance between ‘they all progress at different rates’ and genuine areas for concern.

A year and a half

At 18 months, babies are becoming toddlers. Their understanding of the world around them is growing, they are walking and talking – though there are quite big variations in how far they’ve got with this – and they are starting to become little 'people' rather than babies.

One thing that often changes, sometimes quite dramatically, is that babies who started off happily eating anything can become very fussy and picky. This neophobia, or fear of new tastes, does have its evolutionary uses protecting small mobile children from picking up and eating poisonous things.

For struggling parents, Dr Lastra has some advice. “Routines are important. Make sure that everyone knows when tea time is. Try new meals and never force them to eat. Do get them to try a few bites if you can, but don’t make a huge issue of it. And remember that mealtimes should be enjoyable, not a battleground.” Reassure yourself that this will pass15, just as many other things have.

Importantly, these guidelines are just that: useful markers of roughly where you might expect your baby to be at any given point. If they haven’t reached them just yet, it doesn’t mean they will be behind later in life. By school age, it’s likely that everything will have evened out.

That said, do talk to professionals if you have any concerns and don't be afraid to ask for a second opinion or referral. It’s also useful to talk to other caregivers in your child’s life if you’re worried, especially if they have seen a lot of babies in their time.

Remember to trust your instincts. “Your own knowledge of your child will help detect any developmental problems,” Dr Lastra says. “But don’t be afraid to ask for any help you need if you feel your child isn’t attaining the appropriate milestones and goals. But above all, try to enjoy your child at every stage, as this time won’t return.”

6. Proceedings of the National Academy of Sciences of the United States of America (http://www.pnas.org/content/110/16/6318.long), last accessed August 2019

8. The National Institute on Deafness and Other Communication Disorders (https://www.nidcd.nih.gov/health/your-babys-hearing-and-communicative-development-checklist), last accessed August 2019